Living in the shadow... the optimistic way 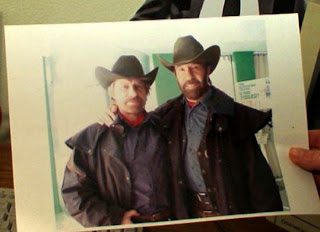 On 7th October in Rzeszow, Poland started 12th edition of the Multimedia Happy End Film Festival. Among the films in the competition there will be a Ben Talar documentary called "In the Shadow of Chuck Norris" devoted to look-alikes of famous persons.

Shooting for the film began in the fall of 2009, when Jacek Pieniazek starred in the short film "Blind Fate". Eventually Jacek was doubling the real Chuck Norris in the series of commercials for Polish bank. Participation in that action once again reminded that in any case you can always count on ... Chuck Norris' good humor .

The soundtrack was composed by Boguslaw Salnikow & Rockaway, you can listen to some samples on Amazon page below. The screening of the film will take place on 11th October in WDK, Rzeszow, Poland.