"The Soul Collector" online - for Halloween! 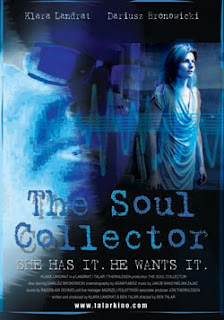 "The Soul Collector" was our first international co-production (US-Poland-Denmark) and journey into HD. One of the shortest film in the portfolio, it had the quickest development-production timeline as it was totally spontaneous project. Now let's watch it in enhanced version, where some shots were realigned and interface on villain's computer was slightly changed to improve visibility. The first version had too much pixelization as a result of compression on a slow-machine. Now each frame was recalculated with new GPU and most of scenes were color graded again with improved lightning. The soundtrack remains the same.

In March 2011 I was approached by Klara, American model and actress who was visiting Poland and looking to get a part in a movie, any movie. Her plans was to stay for couple of weeks in order to see if she could get some interesting roles and she visited some studios, casting calls and agencies. That's what she told me when she was close to leave the country. Since I was involved in production of documentary there were no upcoming shootings, but we decided to go to some fashion party to mingle and network. Upon further investigation we realized that we share similar taste in movies and she confessed that she wrote some ideas for screenplays. Later I received few synopsis' and one of them immediately caught my imagination. I called her and during a one hour long conversation I asked her many questions involving the plot while noting down the outline for screenplay. The next day 10 pages long text with dialogues was ready. It was one week till her flight back to LA.

I wasn't aware of The 48 Hours Film Project, but at that time our production resembled it almost entirely. Since the script involved a minimalist setting in a Polanski vein, it was manageable to do it quick with high production values. With the help of the social network (heavily used by me at that time) we've collected a production group and started to scout locations. As for casting we decided to take my recurring actor Bronek, since we knew each others work style and he had some productions in English in his portfolio. Our aim was the international market after all. As for the crew I was joined by trusted friends again: Adam, who worked on "The Carcass", "Deadly Recording" before, currently was helping me with my documentary; and Andrzej who used to work on "Blind Fate", "The Carcass" and starting to cut "To Give" soon as his first editorial work. Klara's friends Agnieszka supported us with costumes and art design. We wanted to have a professional sound. During the search I was contacted by a musician Jakub, who in the end provided us the atmospheric soundtrack in the trip-hop mood. Eventually we hired Radek to work on sound recording and postproduction. It was very important, because the location we found had extremely loud noises from the elevator. You can hear them in the behind the scenes video below.

The location was belonged to Sławoj, who acted in "Antek". I wished I worked with him again, The Polish Mickey Rourke, as we'd like to call him. For the time being he was taking care of our crew on set. With Klara we rushed to some hardware stores to buy various equipment and prepare the props like the EVP books, but also food and drinks. It was our joint production, but soon we realized we need more money. Our third partner in crime became Jon, Danish businessman, whom I met during New Year's Eve. I remember when he told me, that he would like to produce a movie some time. I wrote him the email saying, that now it's about time. He just asked me shortly about the expected ROI, to what I answered even shorter: probably none. It didn't discourage him at all. He happily provided us with necessary resources, but due to his ongoing commitments he was only able to support with his creative decisions during post-production and marketing.

On Friday we went with the whole crew to location to go through the whole script and identify possible problems. Beside the elevator noise and scratching floor everything was perfect. We broke down each sequence into small steps and on early Saturday morning started the shooting. I've never felt so much comfort and easiness during the shooting. Everything was going according to the plan. We've shot around 5 hours of material ending the session close to midnight. It was a celebration night for me and Klara and we left the part at early morning before she flew to US.

The first working version was available withing two weeks. It was published as private video on YouTube and whole crew was able to view and comment. That kind of virtual work definitely sped up the process. As for the temp track I used the downbeat Giorgio Moroder's score from "Scarface".  There were also some very simple visual effects added, but in all it made a good premise. In general all the cuts remained until final version.

There were few pickup shots which I thought of during the initial edit. We filmed those clips at Andrzej place with his hand doubling for the villain. Those were the pictures showing how Mr. K ejects the tape recording of Adriana's death and puts it on the shelf among other tapes. It made a total sense now, when we renamed the title from "Adriana" to "The Soul Collector". 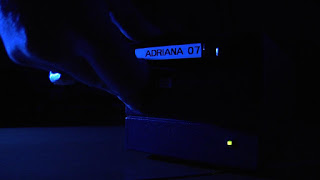 After the working title "Until I breath" we chose "Adriana", because I was researching classical operas at that time. In the first draft of the script the protagonist was not an actress, but an opera singer. For obvious reasons we had to change that. Lip sync never looks too convincing and it would need too much coordination on the set. Once I found the plot of "Adriana Lecouvreau" about competing actresses, I decided to implement it into the script. And to add some class I contacted various music houses to get a licence on the opera. Thanks to Lorenzo Santamato we landed a newly restored old version of the recording from Milano. Lots of the score by Jakub had to be removed in order to maintain uncertainty.

For the next couple of weeks Andrzej was helping me with visual effects and color grading. After each session we went to a nearby dadaist bar to get fresh perspectives. Jon supported us with the key art and poster. Early summer 2011 the film was ready. Instead of usual premiere Klara took it with her to various film studios as her demo, which was our initial goal after all. After some festival screenings "The Soul Collector" was presented at Vimeo competition along with "The Carcass". Both movies shot by Adam had a strikingly similar plot, what I realized only during the shooting. It could be very easily taken as the remake. Long story short, the film is now for your fullest enjoyment.