"In the shadow of Chuck Norris" - now on VOD/DVD

All of you waited for this moment. After four years of shooting and editing Chuck Norris comes to Amazon store. You can watch it online or you can order it in the old way on disc. And what it's about? Here's what Richard Brzostek's review says:


While the documentary, In the shadow of Chuck Norris, focus mostly on Jacek it also brings us into the world of his celebrity look-alike friends in Poland. Without a doubt, they live in an interesting world indeed. (...) Jacek isn’t a professional actor but works as an entertainer. Looking the part isn’t enough as we see in the documentary, but one has to constantly amuse audiences and say and do things associated with the role. And what big shoes Jacek has to wear as Chuck Norris can count to infinity twice and even backwards.

“Chuck Norris” eloquently tells us his story, but the other impersonators also help contribute answering every question we didn’t think of yet relating to what it is like pretending to be a celebrity.

You can watch the film by clicking below:
http://www.amazon.com/shadow-Chuck-Norris-JacekPieniazek 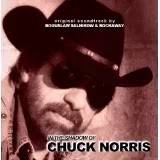