Chuck Norris and the history of "The Fortune"

For the first time you can watch "The Fortune", the most final recreation of "Blind Fate" in HD.

The project of "The Fortune" was launched in November 2009, when I was bored with extended length of "Blind Fate", my first film with Chuck Norris impersonator. The screenplay was written for 20 mins long film (it had 20 pages, the standard industry ratio is 1:1). However during the shooting we filmed additional sequences, which probably added 5 mins of extra screening time. Later again, during the editing, some scenes were further extended, since many times we were filming with two camera setup. Thus the whole story became half-an-hour long film. It was very slow, mystical, deep, and some people even liked that.

However I felt that the poster was a bit misleading. Some Tao/Zen/Native American philosophical quotes were okayish, but after all the viewers were expecting classic Chuck Norris movie - so why the pace is so slow?

"Blind Fate" started as an adaption of biblical story from "Book of Tobiah" and it was set in present Warsaw and it's fictional crime world. The original script involved the character of Cashier, the last fatal victim of the protagonist, who after being killed starts to appear to Tobiah as a ghost. Just like the demons from "Mackbeth". And he was forcing Tobiah to return to the path of virtue. Considering it as my diploma thesis for film studies, the story was going more into direction of arthouse soul-searching genre. But once the project was rejected by my school, I started to make it more entertaining. I wanted to film it anyway, irrelevantly from diploma, as one of my signature flicks. So it was going more into B-class, exploitation, and... camp. By then we've realized that the mentor figure should have more authority and cult recognition. 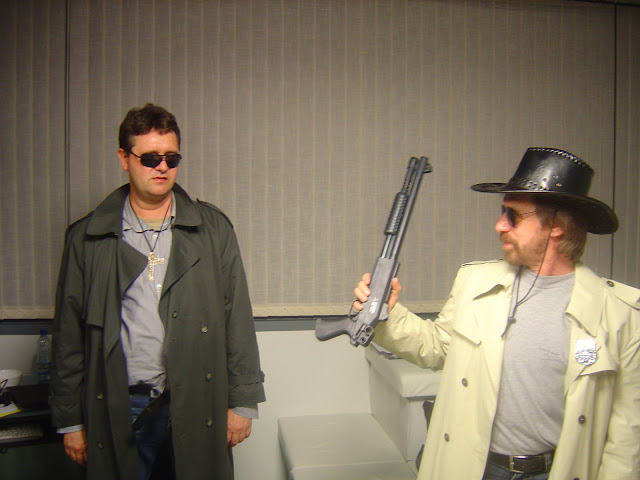 Our benchmark here was "True Romance" by Tony Scott, where Elvis Presley (played by Val Kilmer) was the spiritual mentor of the protagonist. We didn't have access to any Presley impersonator (at that time), but instantly an image of Chuck Norris crossed our minds, whom we spotted in cameo role in Bodo Kox film. And it was only few months after we finished filming Kox for "Deadly Recording" (which by the time of writing "Blind Fate" was still not finally edited). We've googled Chuck's phone number on his website, and based on common friend called him and convinced to discuss the project in person. After hearing the name of Kox, he already knew what to expect from this kind of production. We've met few days later to discuss the role further and we've found a common ground instantly. There was even original Chuck Norris' film, where he played Guardian Angel in the film called "Sidekicks", of which our Chuck reminded us, so our approach was not that radical.

After all, the concept of spiritual guide was not new in the movies. Woody Allen in "Play it again, Sam" was constantly referring to visible only to him ghost of Humphrey Bogart in his persona from "Casablanca". The plot of "No Retreat, No Surrender" with Van Damme had a spiritual guide in the presence of Bruce Lee. And just few weeks after "Blind Fate" was wrapped I went to festival in Cannes, where to my surprise Ken Loach was presenting his newest film, "Looking for Eric", in which football legend Eric Cantona was the invisible friend of the protagonist. Wow!

Trying to make the whole story more similar to "Deadly Recording", lots of slapstick jokes from original draft were removed. We worked on the script for a few long weeks, producing in effect 7 versions. The screenplay was re-written from scratch twice with using just the plot points as a reference, so the final version completely differs from the original idea. The task was after all to move from spiritual slow-paced biblical story into the world known from... "Miami Vice". At least to me. Being a huge fan of the series, I was watching again all the episodes during that year, what left it's influence. Upon rehearsing the dialogues with actors we've noticed also, that female character isn't that convincing as she should. We didn't want to get rid of our actress, who was already scheduled for the production. Instead we wrote for her special role with two additional scenes. And asked another befriended actress to jump in action on a very short notice. Luckily it was possible and she gave us additional strength, so needed in this genre of crime and deception. 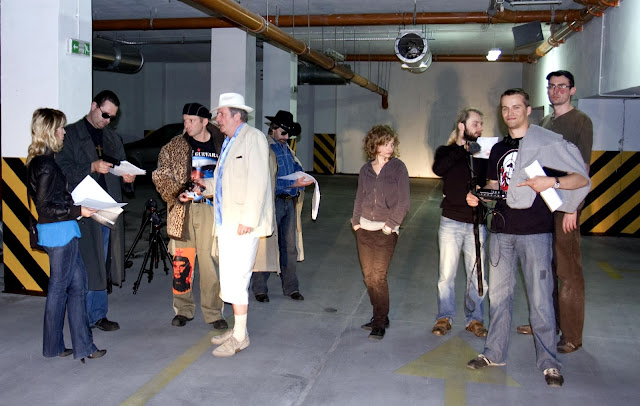 The production was wrapped in April 2009 and few months later we hosted a premiere screening, which was quite intriguing for the audience, since Chuck Norris came in his costume. And it was so natural to him, to pose for pictures with our guests. The movie gained even more media coverage, when we presented it during Happy End Festival in Rzeszów with Chuck giving lots of interviews.  By that time I've watched it already so many times (during editing, on festivals), that I started to feel bored with some of the scenes.

In November 2009 I prepared a short 15 mins version of our film. Just for fun, in a vein of a fan edit, rather than director's cut version. The goal was to leave the best scenes only without making gaps in  the plot. It worked. Now I think that we tried too much to make the film as big as possible, better than the previous one, by artificially extending it. I guess that watching "Blind Fate" for the first time may still make a good impression, but you won't like to re-watch it again. That's not the idea for a cult indie film, which I had since I started making movies. Each one of them should have something special, and I also shouldn't be tired of watching them again after years. Or ashamed.

That shorter version from 2009 was titled by me "Blind(er) Fate". In Polish there was a double meaning, where the adjective sounded as synergy of words "blinder" and "better". Small pun intended. The film was made to be presented only to few closest friends as a gift and remained in the vault... until 2016. And as it usually happens with my old films, I was a bit bored with no new film being shot. At that time I started to play a bit with After Effects, learning to use stock material. In order to exercise I launched the "Blind(er) Fate" and started to improve the action scenes by adding some blood and bullet squibs. Just like George Lucas, who constantly re-edits his films when new technology arises. Beside that I had an urge to re-edit the final scene, which was very unclear geographically. After adding alternative takes the scene makes more sense now. There was some work on color grading as well and improving the lightning ("Fix in Post" is mantra to many seasoned filmmakers).

I decided also to introduce audience to temporary blindness, which was experienced by the protagonist. Every time, when he was considering bad behavior (just like Alex in "Clockwork Orange"), he was conditioned for punishment in the form of temporary blindness. I used the white color instead of fade to black, to make it even more photofobic (I hate it since I'm experiencing it myself - light sensitivity, not consideration of bad behavior - but the fade to black would simply not make the job, white in that case is also symbolically more heavenly). The other significant change was adding original song "Walcz" sung by the film composer, instead of the later re-mastered version with the voice of Julia Trębacz (which I kept only for the end credits). Original song was somehow more raw male power, rather than female rage. And it was also showing the scope by having one song performed in two versions! Finally the title was changed to "The Fortune" to differentiate it from "Blind Fate" association. Anyway, it was the original title of the screenplay, so it made sense to show the roots. Now it's double meaning highlighted the objective of protagonist and Chuck's explanation made sense. However since 2016 the film was left on the old computer and destined to be forgotten... at least until I was able to move to bigger apartment and unpack all my belongings from the cellar. 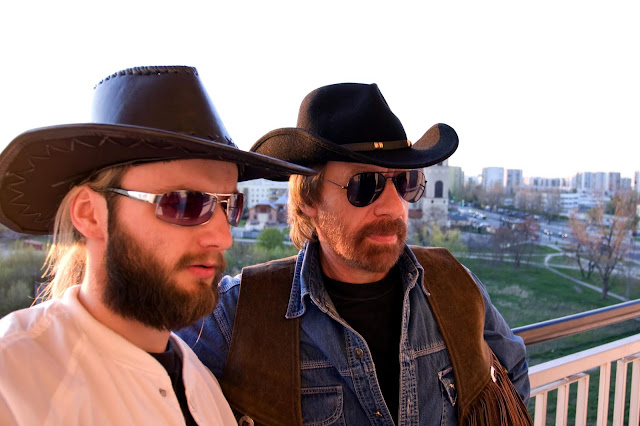 Now it's 2018, almost ten years from the conception of the original story. In between I worked on some other 'special editions' of my films including: "c@ught in the net" which was heavily re-edited twice (as "In the net" in 2010 and "Apart" in 2017), "Disconnected" (re-cut down to 10 minutes for festival presence, and later to 3,5 minutes for intensified 4K version). Also in 2014 I've improved some scenes in "Deadly Recording", and released the movie for free on Vimeo. So it's about time to show also "The Fortune" as an alternate take on the story of everlasting conflict between the good and... better.